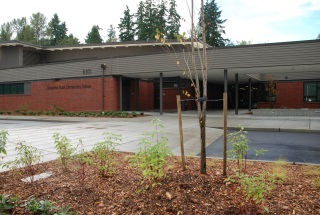 Benjamin Rush Elementary opened in April 1970. At that time it was an open concept with four rooms to a “pod”. About ten years later, walls were built to separate the classrooms. When Rush Elementary opened there were a limited number of phones in the building, copies were made on ditto machines and the only way to get news was by using the radio. Overhead projectors were “high tech”. Since then many things have changed and a lot of new technology has been installed. All classrooms are networked and have computers, ActivBoards (large screen interactive computer access) and a variety of other technology gizmos that students and teachers use on a daily basis.

We reside now in a new building completed in 2012.

Ben Rush was the first school in our district to adopt the Peace Builder program, a research-based program that is simple yet extraordinarily effective in building cooperation, collaboration and teamwork, while reducing acts of aggression. Since 1997, we follow the six key tenets of this program and believe it makes a difference at our school.

The decision to name the school for Benjamin Rush was made by student selection. Rush was a physician, a political rights leader, an abolitionist, an advocate for public education (specifically women's education), and a signer of the Declaration of Independence. He is considered the the father of American psychiatry for his advocacy of humane treatment for the mentally ill - a rarity in the 18th century.