Life Skills for a Community

Our belief at Ben Rush is that to some degree, each of us is responsible for either increasing or decreasing the peace in our homes, schools, and communities. We must all work together to create a conscious America that fosters happiness, better relationships, more productivity and well-being in our community. PeaceBuilders™ is a research-based program that is simple yet extraordinarily effective in building cooperation, collaboration and teamwork, while reducing acts of aggression. 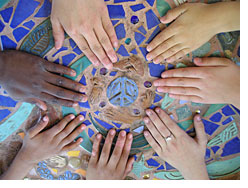 PeaceBuilders™ understand that they alone are responsible for their behavior and they look for daily opportunities to increase, rather than decrease, the peace.

Benjamin Rush was the first Peace Builder school in Washington state. We celebrated the adoption of PeaceBuilders™ with a launch assembly and luncheon in January, 1997. Mayor Rosemarie Ives, former Superintendent Ron Barnes and former Principal Janice Heid addressed the assembled students, staff and community members. Students sang peace songs they had learned from former music teacher Sandy Price, and all pledged to be PeaceBuilders at school and in the community.

Created for the young child, child, pre-teen and teen, PeaceBuilders addresses risk factors, which predict violence, bullying and drug and tobacco use. Results from the PeaceBuilder™ program show in many ways at Ben Rush. One of the most significant is in playground behavior. As students use the guidelines, behaviors and decision-making improved, and far fewer warning and discipline slips need to be issued. At the end of the 1996-97 school year, the first as a PeaceBuilder™ school, the number of such slips had fallen by approximately 40% when compared to the previous year. Playground aides were able to focus more attention on positive playground behaviors, and issued over 900 playground praise notes during the year!

In addition to the PeaceBuilder Program, bully Prevention and antiviolence lessons are taught in the classroom, by the School Counselor.

Kindergarteners - 2nd Grade receive Second Step and Kelso. In a proactive manner, our goal is to teach students several positive ways to deal with the normal conflicts and disagreements that happen when children get together. To do this, we are asking students who have small problems to try at least two of the following ideas (Kelso's Choices) and then when to get an adult for help.

The Steps to Respect program:

Please check out my website for further information on these programs and other programs in the classroom or how to contact me.

Check out the PeaceBuilders™ Home Page for more information.